Let's get started
Return to the Blog

The High Price of Getting it Wrong 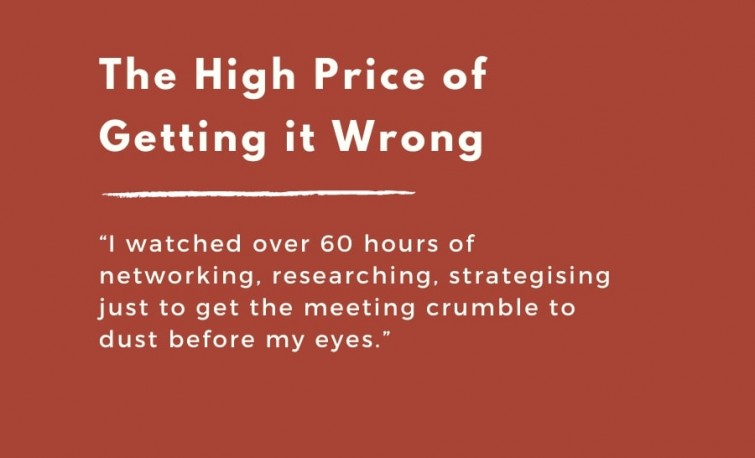 For a fund manager, a yes from Miles Collins* could make your year.

He controls over two thousand, four hundred million dollars of investments, for the Endowment Fund of Sydney University.

He and his team decide what to buy, hold, sell.

It’s not just the dollars behind the yes that matters.

It’s the prestige. The halo effect of dropping his name. That rockets the uptake of the fund by other investors. Confers bragging rights back at the office.

Opens the possibility of being allowed back again in the future, with a new offering.

But it’s easier to get into North Korea than get an audience with Miles.

It takes months of perseverance, guile, and charm to get past the first three gatekeepers. Just to have a few minutes with his EA. And she is razor-sharp.

So, the pitch just to get a meeting better be good. And cut through.

After all there are over 11,000 funds fighting to attract money. Each one eager to have an audience.

Only four are permitted into the inner sanctum each week.

For James, that is his job. To create meetings with potential buyers of investment funds. He’s very good at it, gets paid well for it, and enjoys the challenge.

He was thrilled to get one with Miles Collins for his client.

Except his client stuffed it up

✘ Their pitch had no story, the fund had no reason to be.

Just the investment strategy and the usual eye-rolling stats about past performance. That everyone shows and which only matters at the end, as proof about the validity of the story. But they are not the story that grabs attention.

✘ He hadn’t role-played it, and he stumbled through it. A pitch or a presentation is a performance.

A CEO will typically spend fifteen to twenty hours over the course of a month preparing for the AGM. These are important moments.

✘ He didn’t listen to the intent behind the questions being asked.

“I watched over sixty hours of networking, researching, strategising just to get the meeting crumble to dust before my eyes.”

It’s the same with any presentation you are making to people that hold influence. The power to open doors. To say yes.

You never get the second chance to make a first impression.

And they do matter.

If you want help with your pitches and presentations get in touch.

Let’s have a conversation about the impact you want to achieve. And how we can help.

Next, read Is that your pitch?

The 4 marketing truths of a business slowdown

Warm referrals can be expensive – very